After spending most of the summer working on painting figures, I've returned to my comfort zone--the still life.  I've had the port wine bottle for two years and finally decided it was time to showcase it in a still life.  The wine was wonderful and the trip to the winery in St. Augustine, Florida where it was purchased proved to be a well needed getaway.  I placed it with another bottle holding some remnants of balsamic vinegar.  These two objects provide the primary and secondary anchors for the onions and garlic.  What I loved to paint and always find as a challenge is drapery with intricate designs. 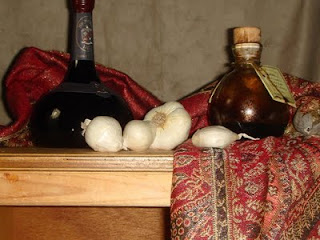 The set-up took about an hour before I finally had it the way I wanted it.   I work on smooth portrait Belgium oil primed linen.  After making an intricate drawing on paper, I transferred the image to my canvas board (11"X14").  Using charcoal, I refined the drawing and then sprayed it with fixative.  This takes about ten minutes to dry.

From here I laid out my pallet of grays with 9 values including white and black.  Drying time is slowed down by using a slow drying medium.  Mine is one part turpenoid to one part M.Graham walnut oil. 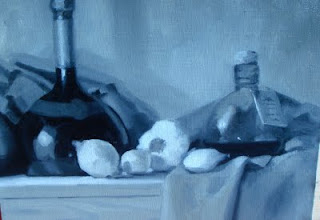 It's been two sessions of approximately four hours each and I think I am satisfied with the results.  Now the hard part, waiting for it to dry throughly before I add color!
Posted by Deborah Elmquist at 3:40 PM No comments: Links to this post

Last Friday was the opening for the Eastern Regional Oil Painters of American Exhibition in Jacksonville, Florida.  David, my husband, and I took the two hour ride to the Corse Gallery and Atelier to view some of the most talented artists gathered in one gallery.  C.W. Mundy, an OPA Master artist, was the judge.  I truly was impressed with his presentation of the awards.  With each award, he described what he saw in the piece that made it so outstanding.  It was a true teaching/learning  experience for me.   Check out the on-lline exhibit at the Corse Gallery.
Posted by Deborah Elmquist at 11:00 AM No comments: Links to this post

Last Thoughts About Weekend with Masters 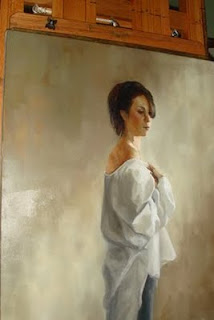 Probably the most valued gift a teacher can pass on to her or his student is to inspire them through their own extraordinary talent.  After watching Jacob Collins demonstrate his process for drawing the figure, I came away with a renewed desire to go back to painting the figure.  Angel was my most recent attempt at painting the figure in some time.  Although I'm not finished with Angel, I am excited about my beginning.


Another inspiring artist, Jeremy Lipking, also sent me back to the canvas with a renewed desire to perfect my skills.  I thank them both for their amazing talent and sharing it with me.

Posted by Deborah Elmquist at 4:41 PM No comments: Links to this post

Here is a trailer of the fantastic movie. Enjoy!
Posted by Deborah Elmquist at 5:33 PM No comments: Links to this post

Weekend with the Masters cont.

Today’s email delivered a letter from Robert Genn’s Twice-Weekly Letter entitled—"The Art of Teaching Art."  After reading an anonymous response about teaching and creating art, I had to put my thoughts into words to help me process what I thought about what was said.
The old saying, “Those who can, do; those who cannot, teach.”  I agree and disagree.  How’s that for taking a stand about what I think!  Years ago, I remember an interview with a noted writer who was asked—“Now that you are older and wiser (he was in his 80’s), what have you learned about life and your art?”   He said something to the effect that he felt in his last years, he was spiritually obligated to pass on what he had learned to those younger and talented individuals. And hopefully, they would do the same in their latter years.  A circle if you will.   He had made his “mark” on the world and the next step in his final years, was to leave behind to others what he had learned and to support their efforts.
So my response is not one that is so black and white.  It’s really a timing issue.  Anyone in his or her early career is not seasoned and truly grounded in their knowledge and skills.  Add to that, the ability to put into words and actions that knowledge and ability for others to understand conceptually.  If you do teach, it’s my opinion that, you the teacher, will be learning more than your students.
In this theme of teaching, and the Weekend with the Masters, I saw the most fantastic, powerful, heartfelt, and very absorbing film (on DVD available at Amazon) dealing with this subject of teaching:  “LOCAL COLOR:  One Master, One Student, One Summer to Dream.” a George Gallo film.

Armin Mueller-Stahl is amazing as the older Russan master and his influence on the young man (a life experience taken from Gallo’s life) wanting to paint under his tutelage.  Another major theme is one that I feel very strongly about.  It's a must see.  Check out the movie clip.

My experience with WWM definitely proved that those presenting could DO and also, TEACH.
Posted by Deborah Elmquist at 11:19 AM No comments: Links to this post

What makes a great teacher of painting?  I believe it’s the same answer if I just asked, what makes a great teacher.
Make a connection between the skill or concept and one that is universally understood through a story or analogy.
A few years back I  observed a master teacher-painter explaining to a student why her painting of three lemons next to a ceramic pitcher wasn’t working.  The lemons looked like they were pasted up against the side of the pitcher.  I could plainly see that space and cast shadows were missing but just loved how the teacher what she needed to do.  It went something like this. . . Have you ever been sitting at the bar minding your own business when some guy who has had a little too much to drink sits down next to you?  Mind you this student was in her 70’s so I wasn’t sure if this approach was appropriate.  She went on to say . . . this guy starts hanging over you breathing down your neck and touching your arm.  You tell him to move over because you need your space.  Your lemons are just like you at the bar.  They need their own space.  She then proceeded to show her where a better placement would be.  By this time everyone was listening and the group chuckled at the end.
Now my point here from a teacher’s point of view is she had the student’s full attention and made a connection that was not only relatable but also memorable.  Using humor and emotions plus the story makes one remember what was taught.  Every time I place objects next to another object, I check to see if they have their own space. 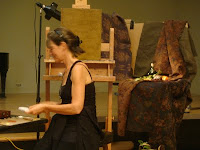 Sherrie McGraw at the easel
At the Weekend with the Masters, David Leffel and Sherrie McGraw showed themselves to be real masters of teaching!
Posted by Deborah Elmquist at 2:25 PM No comments: Links to this post

Weekend with the Masters

It’s going on two months since my trip to Colorado Springs for the American Artist’s Weekend with the Masters.  This four-day event featured some of the nation’s noted authorities on painting and drawing.   One is always asked, was it worth it, or some such question that brings on the standard response.  Yea, loved it—would do it again in a heartbeat—worth every penny. 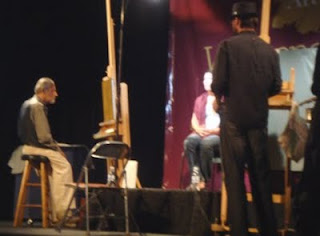 Now that the experience has had time to percolate, I’m left with a different response that I needed to

put into words for myself, as much as, for others wanting to spend big bucks (travel, car rental, lodging, food, and tuition).

First I have to say that when I registered, all workshops were closed.  My only options were lectures and demos.  Not a problem, since I didn’t cherish packing all the materials needed to actually paint with and then have them shipped ahead of time.  In addition, I’d rather listen and watch with my full attention given to the speaker and then go back to my studio to practice what I learned.


Not actually participating in a workshop experience changed the dynamics of the experience greatly and here is where I have to ask, was it worth it?  To answer that question, I had to ask myself what were my goals for going in the first place? It’s only when expectations aren’t met that one feels they didn’t get their monies worth.

First, I  wanted to meet some of my idols of the easel.  Goal one accomplished!  My second goal was to watch them teach.  Here you have to understand my background.  I’ve been a teacher for thirty-five years and a painter for even a little longer.  I’ve trained teachers, tutored teachers, and evaluated teachers, as well as, taught kids from kindergarten through college.  Second goal was accomplished and that’s where my real learning took place and made the trip worth every penny I spent.


I find a great joy is watching a master teacher, no matter what  the discipline.  At the Master’s Weekend, there were many.  To put into words a physical act of drawing or painting requires a set of skills that go beyond being an excellent artist.

Posted by Deborah Elmquist at 11:31 AM No comments: Links to this post

A new adventure in the digital world!

Welcome to my blog!  This is a completely new adventure for me as an artist!  I am more than comfortable in front of an easel working on a gessoed canvas cartooning a new image from one of my drawings, but using the internet for blogging is new to me so please allow for mistakes and some---hopefully few---stupid mistakes.  I will add posts as often as I can and will provide usefull information (I hope) too. You are invited to follow along as my blog grows and I grow with it.  Many sincere Thanks!
Posted by Deborah Elmquist at 9:12 AM No comments: Links to this post

Deborah Elmquist
I am a professional artist painting in the Classical Realism tradition specializing in still life and portraiture.

Sign Up for My Newsletter Here! Click the Postage Stamp above! It won't get you to Paris, but it will get you my bimonthly newsletter with tips & information for artist's & art collectors. One more thing; I value your trust & respect your privacy. Your name & E-mail address will never be shared with or sold to anyone---never, ever!

For information about my Open Studio, Demos, Small Group Classes, and Workshops and Clinics, E-mail me at Artist@dbElmquist.com, or check my website: Deborah Elmquist Fine Art for details.

For information Click the palette above to go to my new fine art print page and E-mail link.